Fascinating ‘Soviet End of an Era Tour’ – June 2016
to Transnistria, Moldova and Ukraine

We have a most unique tour which will take place in the 2nd half of June 2016 where we have managed to secure an invitation to visit the veterinary university in a small Transnistrian village which will close its doors for good this June. It will be quite an experience as the university used to have over a thousand students in Soviet times and numbers have dwindled down to just 60 students, this being the reason for the closure. Dependant on the schedule of our Transnistrian partners, we may have the opportunity see the graduation ceremony, which itself is fascinating, and still embraces all the Soviet traditions many of which are no longer practiced in ex-Soviet States today.

We have two departure/arrival points the 1st in Berlin, Germany and the  2nd in Krakow, Poland.

Prior to Departure
Sun 19th June – A departure from Berlin is available at 1pm.
At 8:30pm we shall meet in Krakow for drinks and a pre trip briefing.

Day 2
Tues 21th June. Nestled in a most calming rural setting Kamenets-Podilskiy is one of Ukraine’s earliest cities first mentioned in 1062, and boasts a large fortress. This used to be one of the Soviet Union’s most popular travel destinations among students and resembles a small fairytale town.
Arrival in Camenca, Transnistria – Check into Sanitorium/Hotel.

Day 4
Thurs 23th June. Departure to Karmonovo – small Transnistrian village where we shall have a picnic on the edge of the forest, with traditional Moldovan/Russian cuisine and wild boar Shashlik roasted over a coal fire.  Guided tour of the Veterinary University, including student accommodation, class rooms and library. Tour of the cultural centre of Karmonovo, we will see the kind of activities and classes that are organised for the local children from theatre and dance to art classes. The very last graduation day of the Karmonovo Veterinary University. This is a once in a life time opportunity to see the veterinary university up close for the very last time and to see a traditional Soviet graduation ceremony. We will get to speak to students, to find out what they see for the future and what is planned with the university after it’s closure?
Return to Tiraspol – For an evening meal, followed by a trip to a local bar.

Day 5
Fri 24th June. Tour of Tiraspol’s Molochniy Kombinat – The Tiraspol dairy plant, which still produces milk, yoghurt, kefir (local sour milk drink) and ice cream according to the Soviet ‘GOST’ standard. This is your chance to taste a real Soviet ice cream! Before departing in the afternoon to Komrat the capital of the Autonomous region of Gagauzia, Moldova, we will eat at the CCCP canteen at Tiraspol’s quirky bus station. The Gagauz people are of Turkish heritage and they have their own language. In Gagauzia the lingua-franca however is Russian and not Moldovan.

Day 6
Sat 25th June. In the morning we shall leave Komrat early, and drive down a quite lonely route through Moldova’s picturesque south to Moldova’s last surviving collective farm. This is a unique insight into the workings of a Soviet collective farm, and the lives of those that work there. We will meet both staff in the office and field, followed by a guided tour, as well as getting to taste (depending on the harvest) the farm’s produce. We finish off the tour by washing down a cool beer at the collective farm’s very own staff bar.
We then depart Moldova and cross back into Ukraine, where our bus will take us through the former Romanian region of Bessarabia to Odessa. This is a most picturesque drive, as we meander along the black sea coastline as the sunsets in the distance of this tranquil land. Dinner will be served at a traditional Ukrainian road side café.
Arrival Odessa PM.

Day 7
Sun 26th June. Odessa is one of the most exciting resorts on the black sea, boasting Ukraine’s largest seaport, and is the most popular tourist destination in the country. The old town, and beach bars located in Odessa’s Arkardia district are a perfect way to unwind and relax after the long journey.

Day 8
Mon 27th June. We will have a relaxed start to the day, with free time in Odessa until 1:00pm at which time we will depart for Kiev.
Arrival in Kiev PM – Evening meal followed by a walk to independence square which was home to the popular uprising which ousted President Yanikovich.

Day 9
Tues 28th June. Day in Kiev with a choice of optional tours
9.1 Trip to the former residence of Viktor Yanikovich
9.2 Day trip to Chernobyl
9.3 City tour of Kiev 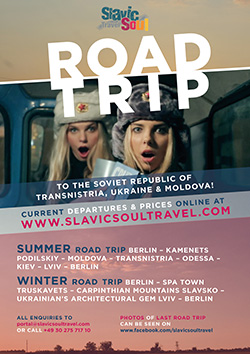